Solar Power Inverters – What Does A Solar Inverter Do?

Solar power inverters change DC power generated by solar panels into utility-grade AC power that can be used in your home. Solar hybrid inverters sit between the solar power system and, home appliances and utility grid. They can supply excess electricity from your solar panels to grid network and also charge batteries from grid network when the sun is low. To connect to the grid, the power needs to be in alternating current and solar inverter does the job.

What Is A Solar Inverter

A solar power inverter also known as PV inverter is a hybrid inverter that has the capability to convert 12/24v DC electricity in 120/240v AC electricity and vice-versa to supply power to off-grid electric networks and can feed power into grid supply. 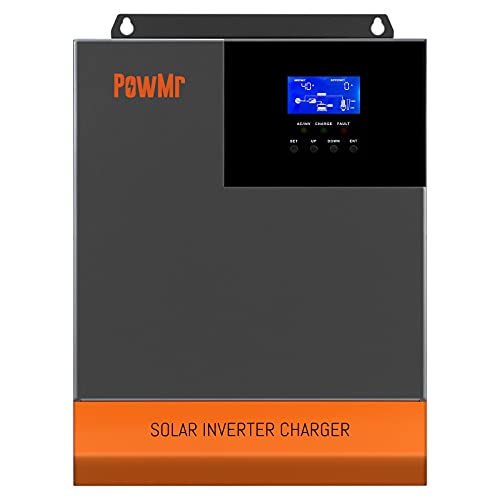 A solar inverter has a built-in charge controller, which is used to provide a steady supply to the battery to charge and then receives the 12/24v dc power from the battery and converts that into 120/240v at 60/50Hz for regular power utilization for home appliances. See details here.

It also has the ability to charge batteries from 120/240v AC by rectifying them into 12/24v dc. It is a compact smart electric machine that works between the solar panel, battery, electric load, and grid supply by keeping every current form and voltages according to their need. You can feed your extra produced electricity to the utility grid power supply companies using a solar grid tie inverter.

It’s worth noting, approval from the utility grid authorities is required for selling electricity to them. These are perfect off grid inverters for solar energy system. Read my guide on best 3000 watt inverters here.

A solar inverter solves a lot of your problems by converting 12/24v dc supply from the solar panel into 120/24v AC at 60/50Hz frequency, but that comes with a serious cost. It can be anything between $1000-3000. As modern solar inverters are smart machines that decide many things at their own pre-set values and uses controllers, converters, transformers, and filters in the process, that adds up to their price.

How Does A Solar Inverter Work

The solar inverter takes 12/24v dc supply from the solar panel, which can go a bit up or down according to the sunlight density. It has a built-in charge controller that changes the input dc value into pre-set values by using amplifiers and supplies a steady 12/24v dc supply to batteries and also can charge batteries from 120/240v AC grid supply by converting it into 12v dc.

Then receives power from the solar battery of energy storage system, and converts 12/24v dc into 12/24v AC through electronic switches made by using different transistor connection techniques and finally that 12/24v AC is transformed into 120/240v AC at 60/50Hz by using step-up transformers. Here filters are used to remove unwanted frequencies from the supply line.

Through a solar grid tie inverter, you can sell power produced from your solar panel to grid AC power supply. In such conditions, your solar inverter does all the job by converting 12/24v DC electricity into 120/240v AC electricity matches the frequency at 60/50Hz, waveform phase at pure sine waves, and angle 1 degree higher than the grid supply. Then supplies to utility grid. It keeps voltage a little above the grid supply as potential differences let the power flow from the inverter to the grid.

In case of black-out, the solar smart inverters stop supplying power to the grid as they have a maximum power point tracking mechanism to continuously evaluate the voltage difference and lookout for maximum power limit. Read my guide on how power inverters work here.

These three types of inverters are based on their network topology, conversion ability, and the size of load they can take on.

In a string inverter, many solar panels are connected with a string and placed in a row, there could be multiple rows, but at the end, all of these strings are connected to the inverter. This is the classic design of solar inverter, used since its first commercial use. 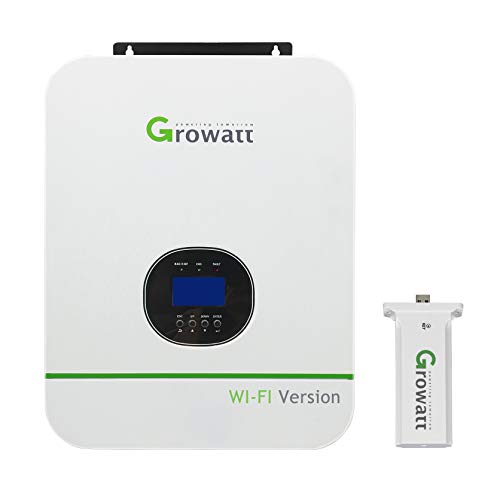 It’s best for a load below 1MW, for a typical house or small commercial load. String inverters can be installed on any external wall of your property, which helps you monitor the input/output voltage regulation and solar battery charging status.

A central inverter is used for a load above 1MW. Instead of multiple string input, all strings are connected through a common box that drives 12/24v dc supply power from PV system to the central inverter.

Central inverters are installed at larger solar installation units, and where consistent power is required. Central inverters are more suitable for Solar farms and large collective commercial units than string inverters. It has a better response to change in input power as the light density changes because of its larger conversion unit.

Solar micro inverter is small-size inverter that are installed separately at each panel and convert the 12/24v dc supply to 120/240v AC right after its production. Some solar panel manufacturers already install them at each solar panel to make solar installation easier for you. 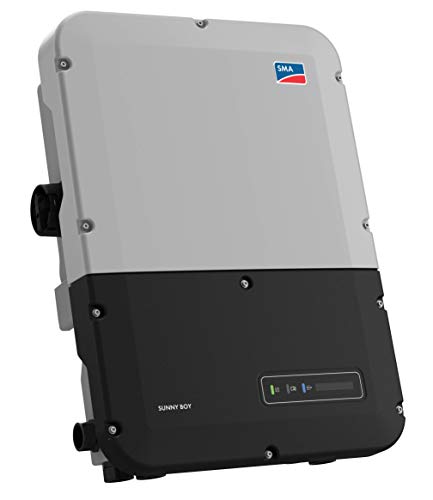 Solar micro-inverters can be used for very small consumption units up to 3-5KW as for higher range these would be very pricey. Such inverters would do well for solar water pumps and other single/small load consumption.

What Does A Solar Inverter Do

Direct DC power output from solar panels can’t be utilized by our many home appliances. So, the solar inverter makes it useful by converting 12/24v dc supply by the solar panel into 120/240v AC, which is consumed by electric appliances.

Read the differences between inverter and generator here.

Grid tie solar inverter allows you to sell excess electricity produced from your solar PV system back to your utility grid network, and power companies will pay you back for that! All you need to do is install your solar system with a grid tie inverter, which feeds power into the grid supply after matching voltage level, frequency, waveform, and phase angle.

As with a solar power system, you don’t have to pay any bills for your power consumption that helps in savings and a good earning to expense ratio for a small business unit.

Smart inverters are very efficient power optimizer that can be efficient anywhere between 85-98%. So, with this much efficiency, a solar inverter consumes very little power in the process of inverting and transforming power. The energy consumed for the conversion is also generated from solar panels, which is free of cost.

The grid supply faces many disturbances in voltage due to the reactive power in distribution and transmission line and doesn’t give a steady 120/240v AC supply but a bit higher/lower. The Solar inverter provides your electric appliance a steady 120/240v AC power output by perfect transformation and filtering process.

Here’s how I store distilled water for later uses.

As solar panels convert solar energy into 12/24v dc electric energy, which is later converted by an inverter into 120/240v AC power. That defines the solar inverter’s dependence on sun light. If there is no or considerably low light for a time, a solar inverter would be an electric appliance of no use when the storage battery is down.

Here’s my comparison between NiCd Vs. NiMh battery for solar.

A solar inverter is a quality electric machine having a life of up to 12 years, but if due to any uncertain and unwanted accident, if its internal converting circuitry gets damaged, then repairing cost is very high. Second, it will never gain the same efficiency and quality after one is exposed to serious damage.

A solar inverter depends upon a solar power system as it receives input from solar panel and solar battery. These solar panels require huge space for installation that you might have to give them extra space on your rooftop.

Read my blog on how solar farms disadvantages here.

The regular power inverter does not have a built-in charge controller. So, it doesn’t get steady 12v dc input when the battery is low.

As the solar inverter gets a steady 12v dc supply from the battery until it is completely drained out, it has a better-regulated output voltage at 120/240v at 60/50Hz frequency.

Which is more efficient? Monocrystalline Vs Polycrystalline Solar Panels or this new kid in the block?

Standard inverters only charge from the direct 120/240v AC supply, but a solar inverter has dual input options, and you can charge your battery from solar power in the day and grid supply at night times.

There are standard inverters in the market claiming pure sine wave frequency, but as they don’t have much-regulated input supply, their sine wave is not 100% pure and therefore has low efficiency of 80-90% compared to 85-98% of solar inverters which has pure sine wave.

Here’s the differences between 24volt vs. 12volt solar power system.

A solar inverter has a longer life span as it receives much-regulated input voltage compared to the standard inverter and has extra protection schemes for current, load, and voltage surges.

Here’s How To Get 12 Volts From A 24 Volt System – The Correct Method.

How long do solar inverters last?

The solar inverter has a life of approximately ten to twelve years. They usually last longer than standard inverters as high technology protection scheme of anti-islanding protection is used to turn off the inverter and trip it in case of any load, current, or voltage surge.

What is the difference between kW and kWh?

Watt is the unit of power, and so is the Kilowatt, where the Kilowatt-hour defines the usage of power in the specific time that is an hour. Usually, power, and electric energy words are used for the same purpose in the common world, but technically, they differ. Kw is power produced or consumed at instance, where kilowatt-hour signifies energy used by an appliance in a time frame.

How much does a solar inverter cost?

The price of solar inverter ranges between $1000-3000. It depends upon its capability of power conversion in wattage, efficiency, frequency, quality of sine wave, and on the value and performance of components used in its circuitry. The main price difference is due to the sine wave quality and conversion capability in watts.

Solar Inverters In a Nutshell

Here’s my tips on Protecting solar panels from hail storm.